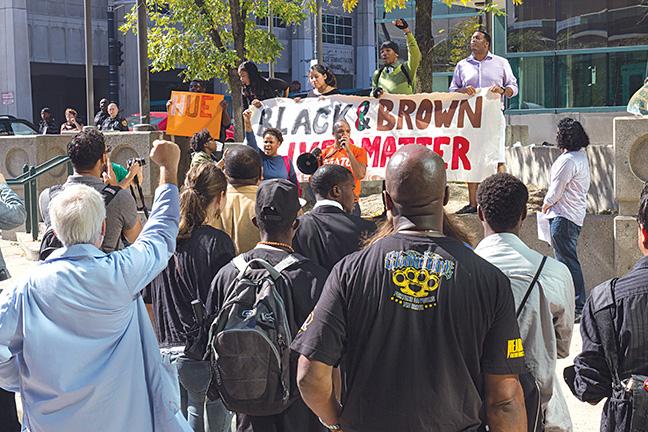 On Friday, Sept. 26, the MATC Black Student Union along with the Latino Student Organization held a rally outside of the S-building of the Downtown Milwaukee campus. The rally was held to put an end to mass incarcerations and deportations.

Mass incarceration and illegal mass immigrant deportation are hot button topics not only across the state of Wisconsin, but the United States of America as a whole. On Sept. 26, at 12:34 p.m. the  MATC Latino Student Organization, (LSO), along with the Black Student Union, (BSU), hosted a solidarity rally at the Downtown Milwaukee campus, in front of the S – building.
The rally was organized to inform as well as educate the community about unity and standing in one accord against injustices that violate human rights. In the quotes of Angela Walker: “I want you to know that when we are together, we are strong!” Blaring from a bullhorn among the 50 plus in attendance, including myself, Ms. Walker also stated: “I want you to know that you are more powerful than they tell you!” These positive words motivated the crowd into a charged chant exclaiming: “One skin we win!” One skin we win!” As peace signs rose into the air, and an orange banner with the chalked letters “HUE” appeared, it was clear solidarity can be possible. On a personal note, the solidarity rally was very community conscious and supportive.