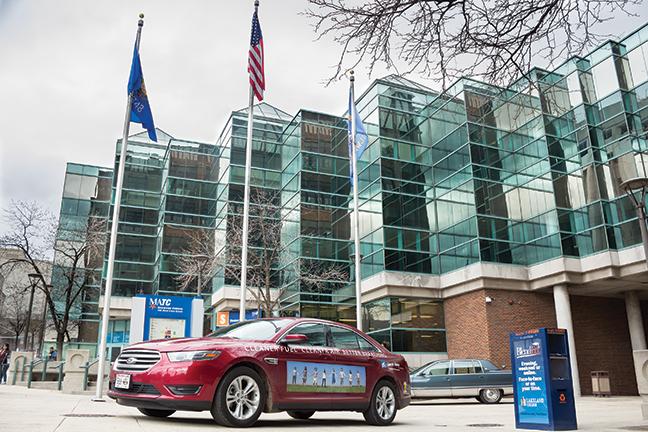 This 2015 Ford Taurus alternative fueled Green Vehicle was on display at the downtown MATC campus. The vehicle was brought in by one of the event’s major sponsors, the American Lung Association in Wisconsin.

On Tuesday, April 21, Wisconsin Clean Cites and the downtown campus hosted the latest showcase on alternative fueled vehicles.
This event was sponsored by the American Lung Association in Wisconsin, which puts out a quarterly newsletter called Clean Air Choice Connection. Their mission statement is “Our initiative educates motorists, fleets and policymakers about cleaner fuel and vehicle technologies available today.” Several local and out-of-town agencies brought in their vehicles, giving the public a firsthand look at the new technology in use. Among the vehicles showcased was a 2007 Electric Vectrix, a business no longer in production status.
Benjamin J. Nelson, owner of this vehicle, is a graduate of the downtown campus who jokingly stated, “It took me 14 years to graduate from this place, with two associate degrees!”
Nelson’s vehicle was a winter project that began in his father’s garage. He found the needed power source in a junkyard and realized that it would suit his project well. After putting in $500 and “much tinkering” he was able to unveil his first of many alternative fueled vehicles. This from a student who had no interest in cars and studied visual media and graphic arts.
Nelson credits his success with being able to have a library card and the concept of “Never stop learning.”
For more information on this former student and his accomplishments, go to 300MPG.org, and interact on his blog.
We Energies displayed one of their fleet utility trucks with its Odyne hybrid drive system. This vehicle was part of a 292- vehicle, $45.4 million award from several agencies such as the U.S. Department of Energy (DOE), Electric Power Research Institute (EPRI) and South Coast Air Quality Management District of California (SCAQMD).
The Department of Public Works brought their electric powered Chevrolet Volt, which is the latest in electric battery- powered vehicles.
This vehicle is streamlined and very efficient without compromising performance. Other alternative fueled vehicles were showcased in order to give the public ideas on how we can contribute to our world.