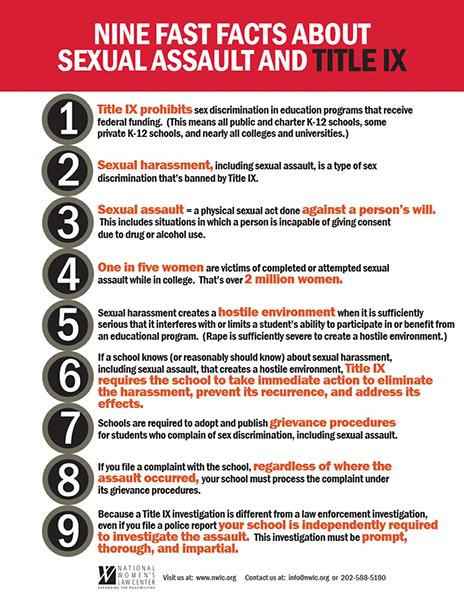 In the last full week of September, while everyone was enjoying the beautiful weather, a study was released on Campus Sexual Assault by the National Sexual Violence Resource Center. The study detailed how one in five women and one in 16 men are sexually assaulted while in college. Ninety percent of sexual assault is never reported, according to the study, and among college women, nine out of 10 victims of sexual assault knew the person who sexually assaulted them. According to the MATC deputy chief of Title IX, Carolyn Spain, 99% of victims at MATC knew the alleged attacker. “It was either a dating situation or having been in a classroom setting with someone or at a party off campus, something like that,” Spain said.

So what is sexual assault? According to MATC Student Code of Conduct, it is defined as unwanted and usually forced or coerced sexual intercourse or sexual conduct. (Victims include persons who are unconscious, mentally ill, or deemed unable to give consent.) Spain explained that MATC has its own policy for processing complaints about sexual harassment and misconduct. “We do have our own policy about how we investigate and what the process would be, and how we would respond, and it’s fashioned after the Title IX legislation, but only with a few little nuances that we put in as far as things that we could control, as far as time frames, and how long we would conduct an investigation,” said Spain.

Title IX is a law that states, “No person in the United States shall, on the basis of sex, be excluded from participation in, be denied the benefits of, or be subjected to discrimination under any education program or activity receiving Federal financial assistance.”  Spain explained, “Title IX is old, but the focus has changed, because Title IX’s focus originally was more on athletes and making sure that females were treated the same in the athletic arena and that they weren’t being harassed or discriminated against. Then the focus kind of changed in the mid-’90s where they started to try to re-focus and say that that wasn’t just the only area; that there were campus inequalities getting into specific programs, being able to access certain parts of the college, being able to access certain courses, so that’s when the turn was made where sexual assault, sexual discrimination, harassment,… sexual misconduct, those kinds of things became the forefront for Title IX. That’s when the college campuses started having someone specific on their campuses to take a look at this and to have a safe haven for people that needed to talk about what had happened to them and to get resources.” Spain, as deputy chief of Title IX, investigates allegations and makes determinations. Trevor Kubatzke, vice president of Student Services, is the chief of Title IX at MATC. He receives the complaints.

Spain explained that there are several ways for students to report an incident. Students could report to public safety and Spain said, “We encourage students if something’s happening right then and there that they need to first get Public Safety involved and then Public Safety will call either Archie Graham, Student Life director, or myself.” Students can also fill out a complaint form, which can be found on the MATC website at the top. Click on the link called Speak Up for Safety, and there is another link to the Maxient Incident Report form.

Spain said about reporting an incident, “It’s whatever the student feels more comfortable about. We put the form out there because people can remain anonymous if they have a complaint. If you’ve been assaulted and you don’t want people to use your name or to give information about yourself, you can request to remain anonymous. We encourage you to take advantage of whatever is most comfortable to you.”

So how many incidents have there been at MATC?  Two kinds of sexual offenses are reported in the MATC Department of Public Safety 2015 Annual Security Report. According to the report, forcible sex offenses are any sexual act directed against another person, forcible and/or against the person’s will; or not forcible or against the person’s will where the victim is incapable of giving consent. This includes fondling and rape. Non-forcible sex offenses are unlawful non-forcible sexual intercourse, according to the 2015 Annual Security Report published by MATC Public Safety. This includes incest and statutory rape, which is rape with a person who is under the statutory age of consent. In 2012 and 2013, MATC had a total of three forcible sex offenses, and zero non-forcible offenses according to the security report. How does this compare to local colleges? Looking at University of Wisconsin-Milwaukee, for instance, in 2014 it had seven