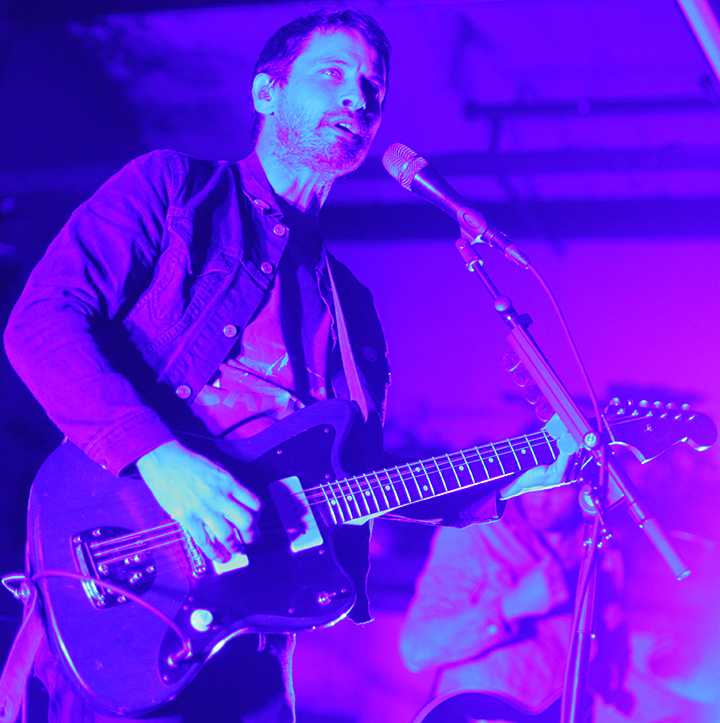 Stepping into the warm, infamous Colectivo coffeehouse off Prospect Ave., to get away from the wet wintery mix outdoors, you would likely be surprised to know a rock show is due to begin. This music venue was different right from the first steps inside. Rather than being welcomed by loud grunge and the recognizable bar smell, the aroma of coffee and baked desserts were accompanied by mellow cover songs. Unbeknownst to some, tucked away behind the curtained glass wall is an intimate space for artists and listeners to be together.

When you first enter the backroom at Colectivo on Prospect, the space seems perfect for an acoustic performance. String lights overhead draw your attention to the skylight windows and plants resting on shelves above. The space feels similar to the cantinas in Austin, Texas but with our tender Midwest vibe. As people start to fill the room, the empty tables and chairs are filled, leaving only standing room space. Before you realize, it feels less like a private acoustic show and more like your typical rock venue.

Ottawa-grown Hollerado first stepped onto the stage, sharing a crowded space with instruments and sound gear.  At first glance, these guys look like old classmates you may have gone to high school with, and their sound was just as nostalgic: as if pop punk didn’t grow old, it just grew up.  Their set was packed with 10 songs that brought you back to your youth, those albums that you played loud and sung along with louder.  Songs like “Born Yesterday,” and “Americanarama,” had the crowd, a full room at this point, dancing in place and rocking their heads along to the infectious beats. Toward the end of the set, Menno, the band’s lead singer, invited a crowd member up onto the stage to help sing along to “Juliette,” kicking off their American tour with enthusiasm. As the set ended, the band reminded us of their forth-coming album.  As a new fan of the band, I am looking forward to it. These veteran rock stars really kicked the night off with “na na nas” and “la la las”  to build excitement for the headlining, Sam Roberts Band.

After drinks were refilled, instruments shuffled and lights turned back down low, the Sam Roberts Band took the stage. Another born and bred Canadian band welcomed us and thanked 88Nine for the airplay, with the kind, Midwestern warmth we all know. Their set opened up with their new album’s title track, “Terraform.” The dreamy sound filled the room and put a slight swing in the hips of the audience members.  They worked through songs across all six albums, from “Bridge to Nowhere,” to “Angola,” and highlighted their latest album by playing new favorites.

The new album has an experimental and refreshing take on melodic-rock. The show moved along on relatable and inspiring lyrics flowing alongside instrumentals, similar to Coldplay or U2. Sam Roberts and crew returned for a three-song encore, including their latest hit “If You Want It,” and “Without a Map.” The evening came to a close with “Brother Down,” a song that came from their first album released over 10 years ago. Judging by the crowd’s response, this will hopefully not be the last time we see Sam Roberts Band in Milwaukee.