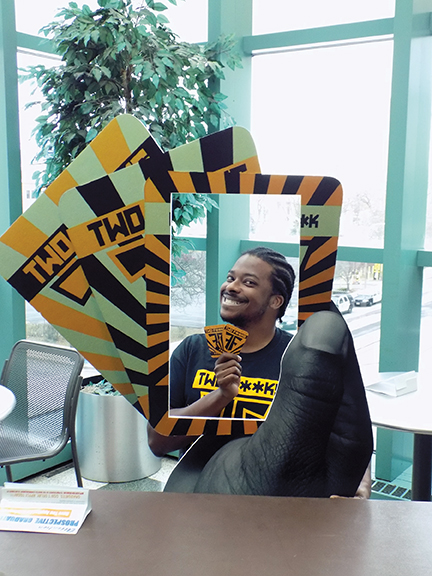 “I can sit and be pissed, or I can do something constructive with my energy.” That is the thought process behind Two F**ks, a card game designed by Darrin Alston Jr. Alston is a graduate of MATC, having studied in the graphic design, animation, and computer simulation and gaming (design track) programs. For Portfolio Night last year, Alston debuted the game, and now he’s crowdfunding it in hopes of full-scale production.
Two F**ks features familiar card rules, matching cards by either number or category, which makes it easy for players to pick up on. The similarities to other games end there; Two F**ks features snarky categories with names like Sinister Sarcasm and Oh Snapbacks.
Alston said, “Two F**ks is the name, not giving one is the game.” Each card has a witty line that players are encouraged to say aloud as they put the card into play. When a player is unable to play a card that matches the card currently in play, they are forced to flip over one of their two f**k cards. When a player is forced to flip both cards and is out of “f**ks to give, they have lost the game. This continues until only one player is left.
Two F**ks is available to play at Oak & Shield as well as Art Bar, each establishment has their own deck. Alston plans to represent his card game at upcoming conventions and regular game events at local businesses; he also has plans for potential expansion decks, namely the “Riverwest Edition.” Alston is also running a pre-sale for T-shirts through January 6. More information about the game, and ordering information can be found at http://sortaridiculous.com/tftees/.
There are also active Facebook, Instagram and Twitter pages for the game. The design of the cards, Alston said, was inspired heavily by art deco as well as old school propaganda posters. Two F**ks is an engaging and hilarious game that this editor recommends playing with large groups of friends.
Alston operates as Sorta Ridiculous Productions, he is also a part of Dapperatus Studios – a collaborative self-described as digital art experts who handle a wide range of businesses, from logo design to music videos and beyond. Alston is also a puppeteer with Angry Young Men Ltd., a collective well known locally for putting on a puppet version of “Night of the Living Dead” on an annual basis. “They’re like my second family,” Alston said of Angry Young Men Ltd. When asked what advice he has for students going into the media and creative arts industries Alston advised, “Stay in contact with the instructors that inspired you, they want to see you succeed.” Added Alston, “I hope to be able to do that, to inspire.”

Update: On May 3, Sorta Ridiculous Productions will be hosting a Two F**ks game night starting at 8 p.m. The event will be held at Oak & Shield Pub, 600 E. Ogden Ave. For more information, the Facebook event page can be found here.