Johnny Craig, vice president of Student Services and Enrollment Management, announced his resignation on May 29. In a letter addressed to Student Government leaders, the vice president stated that his departure was due to a need to be closer to family. According to Craig, this decision will take him back to his home state of Florida.

Over the past two years, Craig has spearheaded recruitment efforts at the school including the Promise programs for high school students and returning adults. During that time, not only did the high school population double, the college also saw a significant increase in adults returning to college.

“The work we have done with the Promise program (both direct from high school and adults) has been a personal inspiration just seeing those students come back to school to re-engage the process and finish their education,” said Craig. “The change that a little idea can have in a person’s life has been impactful,” he added.

Craig began his career at MATC in the fall of 2017. He said as early as the interviewing process he sensed that MATC was special, as he felt the supportive nature from both the Student Services team and campus leadership.

Upon garnering the position he was able to establish goals to increase visibility at the regional campuses, increase student completion rates and help students. His colleagues believe he accomplished those goals.

“VP Craig has been a huge champion for student success,” said Marwill Santiago, manager of recruitment, of his departing boss. “He held us to a standard to increase access and decrease barriers,” he explained, adding that students were his primary focus, especially with regards to budget proposals. “His first question would always be if the proposal is to the benefit of the students. That is the lens he used,” said Santiago.
Craig credits his successful career at MATC to the work and support of the many individuals around him. “I had the support from the MATC Board of Directors, from Dr. Vicki Martin, from my team in Student Services,” he said. “This teamwork allowed us to have the results we had whether it was enrollment growth, completion growth, adult Promise, our athletic teams getting scholarships, our basketball team finishing fifth in the nation, adding tennis teams to the department, adding a new program and clubs,” said Craig.

“I see the momentum at MATC building and that’s why leaving is very bittersweet for me. I really want to be a part of this wave but unfortunately, I can’t stay due to family commitments but if it wasn’t for that, I would be here riding this wave because I do see positive things that will undoubtedly continue to happen.”

As he approached his final week at the college, the VP was reflective, grateful, and humble.
“There have been people who have sacrificed for me along my journey. I did not get here alone. That’s why I always say look back…give back.” 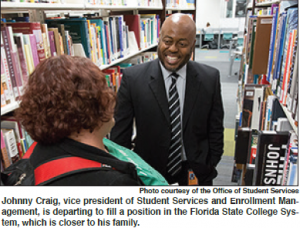 Mr. Craig plans to take a vice president of student affairs position at a school in the Florida State College System, his aim is to continue to serve students in some capacity while trying to leave an impact on the lives of everyone he touches.

Craig says this is what motivates him to introduce people to the value of an education and what opportunities come from that’s because he knows the value firsthand.

“I want to expose more people to how education can change lives. I want to expose more people to have that hope of having a better tomorrow for themselves, their children, and their communities,” said a passionate Craig. “I want to be that individual who helps to inspire people to go a little further than what they think they can do.” He added that whatever direction he takes in the future, he will go to work every day with a smile knowing that he is living his purpose and hopefully making a positive difference in the lives of the people he touched.