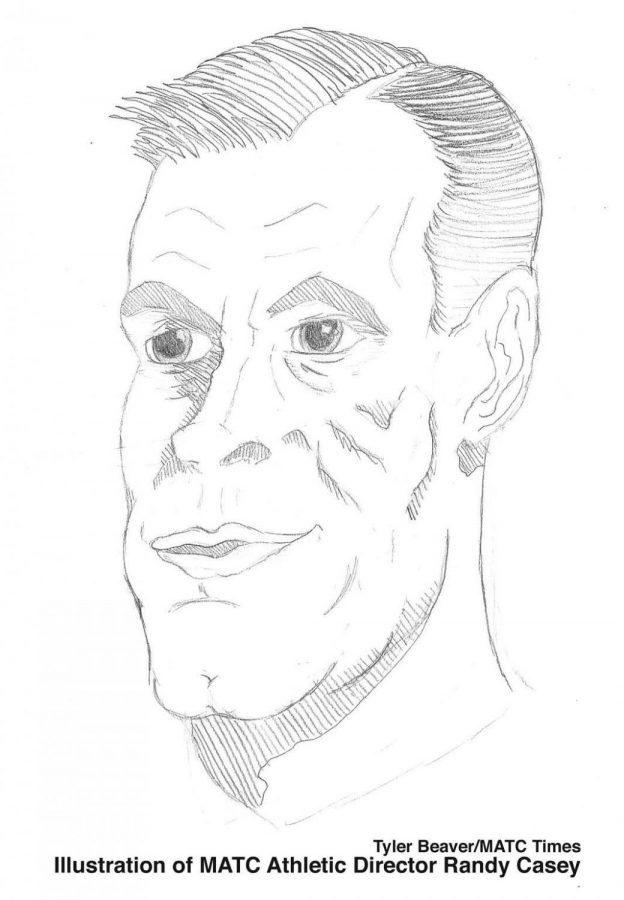 Randy Casey is a busy man. As he rushes to finish some last-minute paperwork, a group of energetic young men crowd through the open door of his M-building office. They laugh and joke with each other, as the athletic director writes at his desk, where his students are always welcome.

Eleven years ago, Casey came to MATC from Mid-State Technical College. He’d been a part-time basketball coach there (which is to say, he worked full-time hours for part-time pay) with an impressive average of 22 wins per season. Given his success at a remote college in Wisconsin Rapids, many at MATC expected he’d do great things here with more resources and a wider talent pool to draw from. They were right.

Over the years, MATC’s athletic department has grown and flourished. The Stormers have climbed in the national rankings and racked up the wins – this year, men’s basketball won fifth place in the National Junior College Athletic Association Division II national championship game. Casey has been named coach of the year by a number of organizations, including the WBCA (Wisconsin Basketball Coaches Association) and the N4C (North Central Community College Conference).

When asked about this success, Casey is insistent, “All those accomplishments, those aren’t just me – those are everybody that’s involved in the program.” He credits everyone from the coaches and the players to the friends and family and people within MATC that support the teams. “I’m just there to point them in the right direction. They’re the ones that deserve that just as much as I do.”

In particular, he emphasizes the behind-the-scenes work of coach Travis Mrozek as a “big, big, big, big piece of this program.” Mrozek is one of several coaches who came with Casey from Mid-State. He creates highlight films and statistics for the players, writes stories for the Stormer website and does all the “little extra things” Casey asks him to do. While they occasionally challenge each other (which Casey believes helps make things grow), they are really on the same page when it comes to their vision for the program.

What they want the program to be is a family. “It’s something we preach about every day,” says Casey. When he has to find a new coach, he looks for someone who really loves it. When he looks for new recruits, he looks for someone who’s a team player. It isn’t just about scoring – everyone has games where they don’t. He looks at the little things – someone who helps, supports, encourages their teammates, even from the bench. He wants his students to grow while they’re here, and continue to be part of the family after they leave.

His role of “teaching life lessons through basketball” is just like teaching in a classroom, he says. He uses the sport to instill skills that will help his students accomplish their goals. That, to him, is the most rewarding part of his job – to see his students’ accomplishments after they leave here, both in and out of basketball. “Getting degrees, starting families, starting careers. It’s all that stuff. You know those are things you can never take away,” Casey
explains