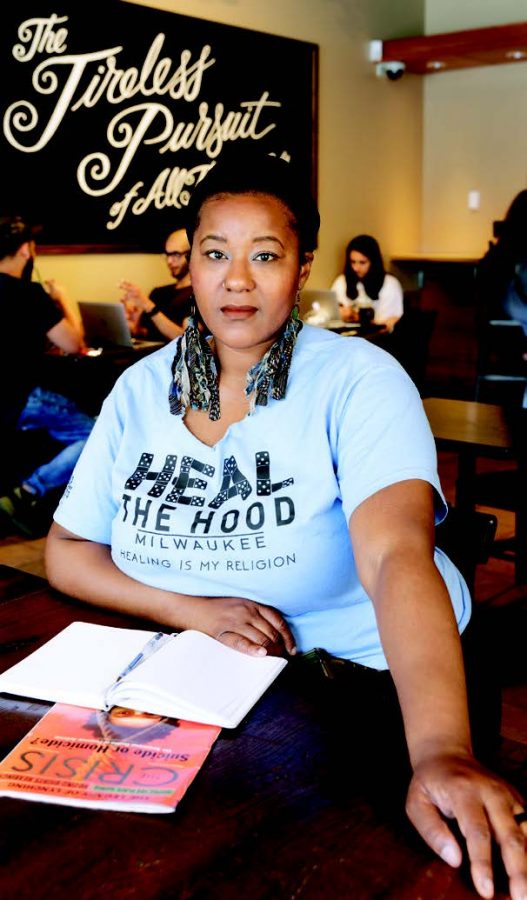 MATC Student and writer, Shantae Peace, was recently interviewed about her social activism focused on healing trauma and racism in Milwaukee.

by Andrea B. Clunie, Photo Editor

Shantae Peace has always felt a pull toward activism within her community, but two years ago felt it more strongly when she returned to her hometown of Milwaukee. After nine years of living out of state, she quickly felt the insidious realities of rac­ism within the city and faced her own struggles with anxiety, depression and post-traumatic stress disorder.

At this time, she started at­tending MATC and became involved in different organiza­tions, including the school paper and the Center for Leadership of Afrikan Women’s Wellness. “MATC became a catalyst for lo­cal activism and what eventually led to the Journal Sentinel arti­cle,” Peace stated. While attend­ing a meeting hosted by Scaling Wellness in Milwaukee (SWIM), a collective of social agencies and nonprofits bringing a trau­ma-informed-care movement to the city, Peace felt the intention of the collective was hopeful, but felt more emphasis should be placed on the history of the city and the human experience. While organizations such as SWIM are a step in the right di­rection, Peace feels a need for actionable steps to promote rapid change. Her position is not misplaced. According to a Brookings Institution study re­leased in 2018, Milwaukee is the most segregated city in the na­tion.

Peace expressed concerns about the high levels of anger and fear in marginalized com­munities, “That can be a very dangerous combination.” She adds that it creates further iso­lation and promotes unhealthy coping mechanisms. There is not a sudden onset of drugs, alcoholism, and a prevalence of mental health issues – it has been years in the making and is the result of systemic rac­ism. Pain and trauma have been passed through generations, creating complex layers of prob­lems. She stated, “People fail to realize what informs their deci­sions.” It is the history of a fam­ily, a community, a country; the past can be so painful and it can be too traumatic to face inward. For Peace, it starts at the human level – the core of the individual – realizing true human value and the value of experience. “It is brave to focus inward and find healing,” she said.

Peace asserts that experi­ences that would be deemed “traumatic” in non-black com­munities are expected to be ab­sorbed and normalized in black communities. It is not normal and should not be minimized. She strives to find balance and healing from her own experienc­es through the power of her pen. “[In my writing] I promote open­ing the floor to talking about mental health; there is little tolerance for open communica­tion within the immediate com­munity. We need to re-evaluate the family structure, examine the community structure, and correct how we relate to one another so there is an ability to heal as a collective.”

Peace continues looking within herself to confront fear, challenge her perspectives and remove self-imposed barriers by exercising self-expression. As a poet, she challenges herself to write authentically; finding strength in vulnerability. Peace plans on publishing her poetry and essays in an effort to en­act change. As a final thought, she shared a quote by Martin Luther, “If you want to change the world, pick up your pen and write.”